How does a pressure cooker work? Find out if it’s worth having in your kitchen! 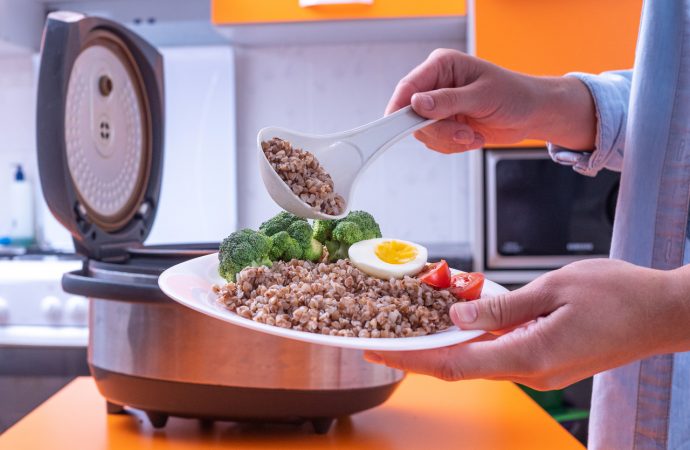 Many of us have heard the term “pressure cooker” at some point, not really knowing what this item actually is. It’s worth looking into this device, learning about its features and thinking about buying one, especially if you can’t devote much of your time to cooking. In an era of haste and efficiency, it is extremely useful.

What is a pressure cooker and how does it work?

A pressure cooker is a pot that relies on an uncomplicated factor – the pressure created by the steam created in the sealed space. How does this translate into more efficient cooking? As the pressure increases, so does the temperature at which the water begins to boil. Under normal conditions, this is obviously 100°C, but in a pressure cooker, the boiling point is as high as 121°C. A higher temperature in a tightly closed pressure cooker means faster cooking without the risk of burning food. Moreover, thanks to the tightness of the pot, valuable nutrients and flavor do not escape from the food with the steam. There are many pressure cookers on the market, including electric ones, which can be programmed according to your needs, setting the appropriate pressure and temperature.

What can you cook?

You can cook almost anything in a pressure cooker. Rice will be ready in just a few minutes. Some people also cook soft-boiled or hard-boiled eggs in it. A pressure cooker is especially useful for cooking tougher foods, ones that need to be cooked for a long time, like chickpeas or beans, and they will be ready in less than an hour. It will also be great for preparing braised meat, but it is primarily used worldwide for cooking vegetables, legumes or stews.

The most important advantage is of course the speed of cooking. A pressure cooker will be an ideal investment for people who want to spend their time doing something other than cooking. All you have to do is throw the foods you want to cook into the pot, set the parameters or simply time it on the timer. You don’t have to worry about burning the food and what’s important, the taste of food prepared this way will be more noticeable and distinct. High temperature effectively inactivates any bacteria and microorganisms that may get into your dinner. An equally important benefit is the cost savings. According to the American Council for and Energy-Efficient Economy, a nonprofit organization that studies advances in technology, investment, energy efficiency and energy security, using a pressure cooker saves as much as 50-75% of energy by cooking faster. Preparing food in one pot will also save not only time, but water as well

Pressure cookers are not cheap appliances. Their prices range from 130 PLN to even 1100 PLN. The amount is influenced by the number of functions, material of construction, capacity, possibility of using on an induction stove, power, temperature range and pressure. In addition, while cooking you can’t look inside, you can’t check if your food is possibly ready already and you can’t adjust the taste, for example by adding spices. Cheap variants will not always last you long, and over time the seal may need to be replaced. Due to the inability to check if the food is ready, overcooking can also occur.

Is a pressure cooker safe?

There is a belief among some people that a pressure cooker can explode and cause harm to your health. In the past, when safety standards were not so strictly observed and quantity rather than quality mattered, such situations did indeed occur, i.e. the lid of the cooker could explode during cooking. However, nowadays we have nothing to worry about. Pots are made of durable materials and manufacturers equip them with systems that automatically release steam, thus regulating pressure and temperature inside the pot. The high quality of pressure cookers, of course, translates into their high price.