How to make hummus, or 5 ideas for chickpea paste

You need about 5 min. to read this article. 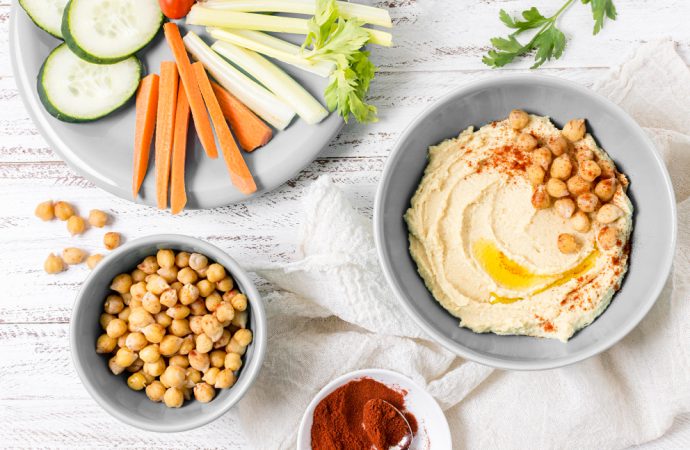 Hummus is a delicious and healthy snack. With its velvety texture and palpable depth of flavor, it’s the perfect complement to traditional sandwiches or a more diet version of bread. Here’s how to make your own homemade hummus in a few easy steps.

Hummus – a healthy addition to many dishes

Chickpea paste contains many essential micronutrients needed for our health. The nutrients found in it include, among others.

the nutrients it contains include calcium, iron, magnesium, potassium, sodium or zinc. In addition, it can be considered a dietetic product, because 100 g contain about 177 calories. It is also a basis for vegetarian diets.

Another advantage of eating hummus is that it is easy to digest, so after eating it you will not experience the so-called heavy stomach syndrome. Introducing chickpea paste into one’s daily diet may have a beneficial effect on the body, especially during periods of convalescence.

What is more, hummus not only gives energy, but is also a rich source of protein, which is needed to support the construction of muscle and bone tissue, and to regulate metabolism, so it facilitates weight loss and proper digestion. It is also recommended for diabetics to lower blood sugar, and for people with high cholesterol to lower it. Interestingly, hummus is credited with cancer-fighting properties. Its regular consumption helps to avoid anemia.

Hummus is most often used as an addition to sandwiches. However, it can be used in a number of other ways, e.g. as a dip, filling for pancakes or tortillas, as a salad dressing, for potato pancakes, or even on skewers! It all depends on your preference.

Hummus – what does it consist of?

In its traditional form, the base of hummus is chickpeas. However, along with the popularity of this delicacy, many versions were created, e.g. with sun-dried tomatoes, paprika or olive oil. Less classic versions include hummus made of black sesame or black olives. Usually to prepare hummus, apart from chickpeas, you need garlic, olive oil, lemon, salt, pepper, tahini and a bit of water

The preparation of this undoubtedly delicious snack is trivial and quite fast. What’s more, you can always diversify traditional hummus with your own additives or spices, creating another inspiring flavor compositions for breakfast, as a snack or side dish for family gatherings or a party with friends. One thing that remains unchanged is its velvety taste and unique, intense flavour, which will pamper every palate.

There are countless recipes for preparing chickpea paste. Below we present both a recipe for the classic version and variations in flavors of chickpea paste.

To prepare you will need:

First, leave the lentils in water overnight. Then drain it and place it in the container of a food processor, chopper or blender, it depends on what device you have at home. The next step is to add a few tablespoons of the marinade or water from the chickpeas, and then just blend everything into a paste. In the meantime, add the rest in the ingredients, which are lemon juice, garlic, tahini paste, about 2 pinches of salt, a pinch of pepper, sesame oil or olive oil and cumin. While blending, gradually add more brine to get the consistency of a velvety paste. And done.

How to serve hummus?

There are also countless ways to serve chickpea paste. If you want to serve it as a dip for crackers, nachos or other snacks, just put hummus in small bowls and decorate them with sesame seeds, basil or a pinch of chilli. If you think of the paste as a salad topping, just add it to the ingredients and mix. A spoonful of hummus on potato pancakes with salmon will become an elegant dinner dish

Pancakes or tortillas in dry form with the paste as a filling will enchant the household with its texture and taste. Of course, if you prefer the traditional form of sandwiches, just arrange them properly on the plate with fresh herbs. No matter in what form you serve hummus, it will always be a delicious complement to your meals.