When should I see a speech therapist with my child? 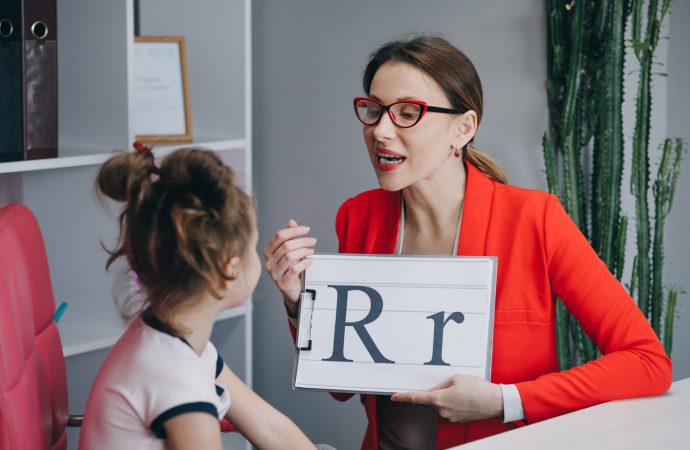 The correct development of a child’s speech is of great importance and is strongly connected with intellectual and social development. At an early stage of life, speech problems may translate into abilities and results at school.

That is why it is so important that a child struggling with speech defects should see a qualified speech therapist early on. Initial consultation and quick diagnosis will allow for effective therapy. The longer the speech therapy appointment is postponed, the greater the risk that the defect will get worse. We suggest when it is necessary to go with the child to a specialist.

When to go to a speech therapist with a child?

It is worth starting from the fact that the causes of speech defects in children can be many. The most common ones include anatomical abnormalities of the speech apparatus or the deep-lying larynx. Speech therapists pay attention to shortened sublingual frenulum, low motor skills of speech organs, especially the tongue or lips.

Equally often the cause of speech defects is improper breathing, malocclusion, hearing disorders. Sometimes habits left over from infancy, such as sucking on a pacifier for too long, can affect speech. Due to the multitude of causes and the risk of exacerbation of defects, it is advisable to go with the child to a speech therapist as soon as you notice any alarming symptoms. Professional consultation will help to reassure the parent or detect developmental abnormalities at an early stage.

Concerned signs to watch out for

Symptoms that may worry a parent should be analyzed in relation to the child’s age. Extremely worrying symptoms include a complete lack of reaction to one’s name, a lack of speech development or regression (a situation where the child stops talking or talks significantly worse, stutters or stammers regardless of the situation)

Children under two years of age

Most children, at 1-1.5 years of age, can already say a few basic words such as “mama, papa, papa…” and then learn to combine a minimum of two words into simple messages (“papa give” or “mama oæ” – mama come!). By the age of two, the child should be babbling independently, repeating syllables and showing a keen interest in speech. If this is not the case, it is reason enough to go for a consultation

Another worrying symptom is not making eye contact with the person speaking to the toddler. This may suggest the early stages of autism, so it’s a good idea to monitor for any other signals.

Children till the age of four

Children up to the age of six

At the age of five, it is worth taking a closer look at the realization of vowels such as “s”, “z” “c”, “dz” interdentally (that is, when the child places the tongue between the teeth or the tongue comes out from the side). Before the sixth birthday children should no longer change voices from the humming series or “r” to “l”

Of course, it’s a good idea to go to a speech therapist for supportive therapy if diagnosed with hearing loss, autism, intellectual disability, aphasia or mutism.

Correct pronunciation, fluency and comfort in communication have a significant impact on the freedom to make social connections and confidence. In school-aged children, speech disorders often also translate into spelling errors, due to problems in writing by ear. This can have a negative impact on learning achievements and motivation to practice on their own for many years

>> See also: Foreign-language kindergarten. Is it worth signing up your child?

In the speech therapy office, the therapist works with the child not only on the phonetic and grammatical correctness of speech, but also on the logical construction of speech, and generally on the efficiency of communication with the environment. The earlier the child begins therapy, the better the results can be expected. Preventive visits to a speech therapist are a good practice, as they will allow any abnormalities to be detected much sooner.